For some reason my house has been a hot topic of conversation lately, probably because I have been bragging about all these new free appliances my roommate got us. More on that later.

So I thought you might enjoy seeing the evolution of my kitchen. It all starts in January 2007 when I first went to look at the house. I promise you the kitchen was the least offensive room in the house, even with the sparkly gold cabinets and bland off-white appliances. Here is a photo of the kitchen and dining room with my home inspector standing in the middle of this mess: 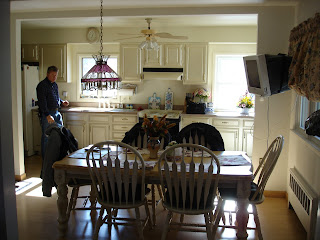 The woman who owned the house was a huge fan of over decorating, as you can see here. Now maybe this is your style but it certainly isn't mine. And most of what I wanted to do with my mid-century Cape Cod was to return it to a more mid-century look. That is not what she was going for. Clearly, she craved "country kitchen." And how! 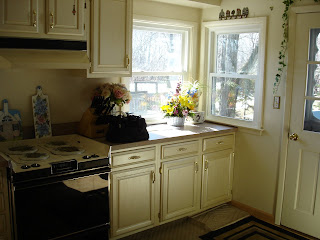 We swapped out the light fixtures, replaced the door pulls with something more period, and painted the kitchen. Mike came up with the idea of painting the back wall and the cabinet fronts blue and keeping the rest of the walls and cabinet sides a pale taupe through the kitchen and dining room since it has an open floor plan between the two rooms. Some listeners on my Facebook fan page think the kitchen is "too blue" but I promise you, even though it is a strong color, it is the accent color in the room. 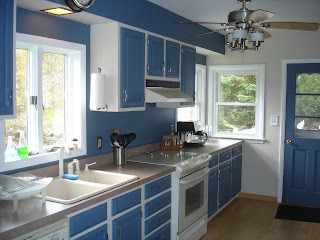 Mike works for a production company that makes videos and they needed a kitchen to film a cooking show in, sponsored by Samsung. And the best part? Samsung would be supplying free appliances for the shoot and we could keep them after they were done. So, in the week before Thanksgiving, all new stainless steel appliances were installed. I bought a new dishwasher to match. 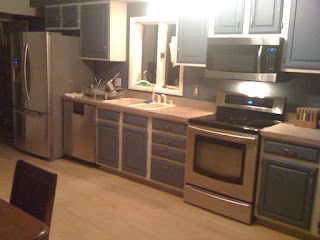 Now the kitchen makeover is complete. And to see it in action, you can check out the cooking show they filmed in my kitchen! As you will see in the video the blue is not too dominate at all and I think the kitchen looks amazing. But judge for yourself. It's short and it has some good ideas for remaking those Thanksgiving leftovers. Enjoy! And post your comments here!
Happy Thanksgiving!
Posted by hello at 12:36 PM 8 comments

Here they are...all lined up and ready to be sent out to their new homes! 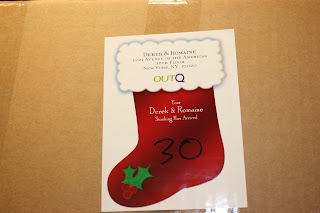 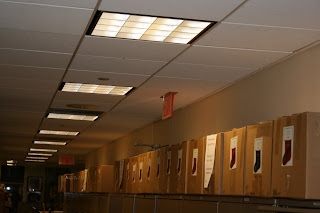 Michelle from San Fran in studio!! 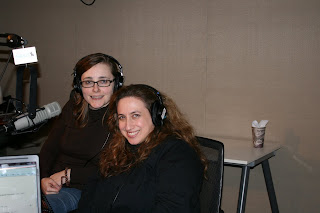 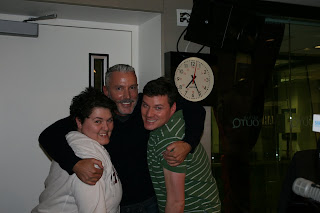 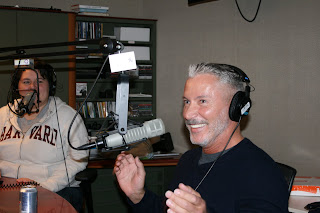 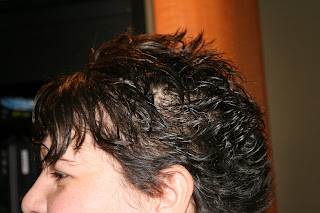 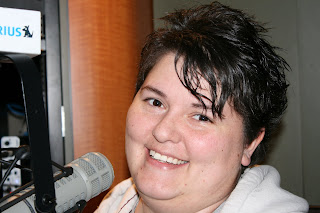 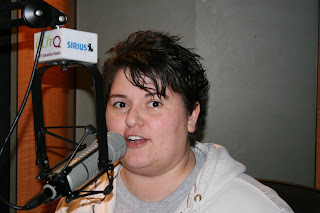 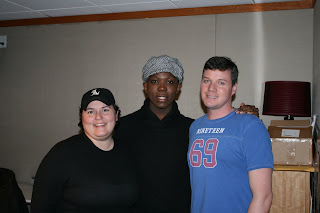 Ryan from Connecticut comes to visit us!!! 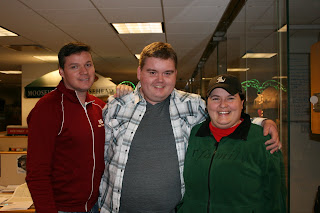 This week has been filled with juicy news! First up: Kathryn Joosten going after Suzanne Somers for her book about cancer.

AccessHollywood.com has a clip of the interview and highlights.

Then Levi Johnston joined the show on Wednesday night!

He talked about posing nude in Playgirl, how he feels about gay men seeing his junk and the real story behind that "feud" with William Shatner. The interview will replay on Friday night's show during the 7pm ET/4pm PT hour and during the Sunday rebroadcast in the 7pm ET/4pm PT hour. But you can hear it now on the DNR Show MySpace page.
Posted by Derek And Romaine Show at 5:14 PM 0 comments

Tonight only get 20% off all merchandise at www.baskitwear.com

This is the place to get all that sexy underwear and tonight all DNR listeners get 20% off everything!
To get this great discount you MUST REGISTER on the site and then enter baskitDNR to get 20% off your entire order!!
Posted by DNR Intern at 8:05 PM 1 comments 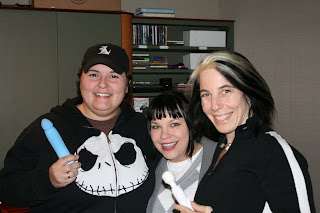 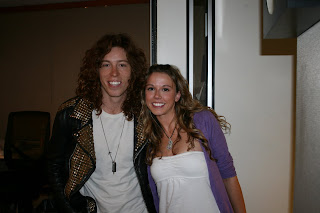 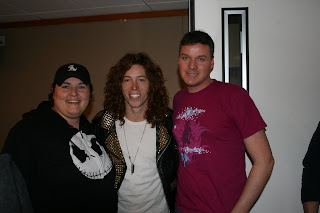 The Flying Tomato flew into our studio... so we brought in former intern Whitney to see if there were still sparks!
Posted by DNR Intern at 6:33 PM 3 comments

Are you currently enrolled in a college/university and looking for an internship for the Spring? Well, you’re in luck! The Derek and Romaine show and SIRIUS XM is now recruiting for the Spring internship session! Go to http://www.siriusxm.com/internships for more information and to apply.
Please note: when including the link in a page update, you will be given an option to change the image. Please be sure to select the “Sirius XM Internship” logo/image. Also, you will probably want to change the automatically populated text that is “XM” specific to say “Sirius XM”.
Posted by DNR Intern at 4:24 PM 0 comments 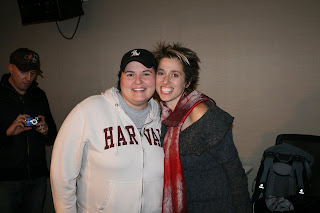 Promting her new CD "Little Girl Dreams" which you can purchase at www.athenareich.com
Posted by DNR Intern at 4:58 PM 0 comments

Sabina and John Doing what they do best (Martinis)

This started an entire swarm of calls about boobies, who knew.

It wouldn't be right if I didn't put in one picture of my man!

Sabina's Boobies (just for the hell of it)
Posted by Anonymous at 11:05 PM 0 comments